Tribal leaders from Canada and the American West gathered in Yellowstone National Park on Saturday. They were there to protest places named after early explorers who advocated for the mass killing of Native Americans.

According to Piikani Nation chief Stanley Charles Grier, Ferdinand Hayden was a white supremacist and U.S. Army Lt. Gustavus Doane took part in the massacre of almost 200 Piikani people in 1870. 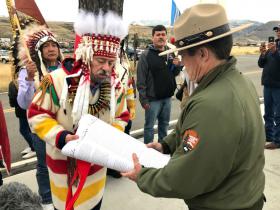 “Let’s be on the right side of history. I know we can’t go back and change history. That horrible history," says Brandon Sazue, chairman of the Crow Creek Sioux Tribe of South Dakota. "But we can move forward together, and by uniting with our brothers and our sisters and our allies,  and with the non-Indian too, to move together to change those names that have for so long desecrated our ancestors.”

Members from over a half-dozen tribes signed and delivered a declaration to park officials asking them to change the names to First People’s Mountain and Buffalo Nations Valley.

“We’ll obviously carry this information back to the superintendent, and be sure he’s aware of your concerns," says Pat Kenney, the park's deputy superintendent, as he received the declaration. "We know this is a sensitive issue and we’ll be sure to give it great consideration.”

Kenney says Yellowstone itself doesn’t have authority to change the names, but the U.S. Board of Geographic Names does. Representatives from that agency, however, were not in attendance, and a spokesperson for Interior Secretary Ryan Zinke was unable to comment before deadline.

Tribes are gathering in Yellowstone National Park this weekend to demand two place names change. Leaders of the Blackfoot Confederacy and Great Sioux Nation are fed up that Hayden Valley and Mount Doan memorialize men who advocated for the genocide of Native Americans.

Yellowstone National Park biologists have euthanized a grizzly bear with a history of exhibiting bold behavior toward humans.

Even after being captured, tagged and relocated to the Caribou-Targhee National Forest in 2015, Yellowstone Public Information Officer Jason Schafer says the bear was undeterred.

A Canadian mining company and a pair of conservation groups have finalized agreements they say will protect two tributaries of the Yellowstone River and part of a crucial migration corridor for thousands of elk from Yellowstone National Park.

The Toronto-based mining company donated 549 acres and its water rights for the tributaries near the company's former Mineral Hill Mine site that closed in 2001.