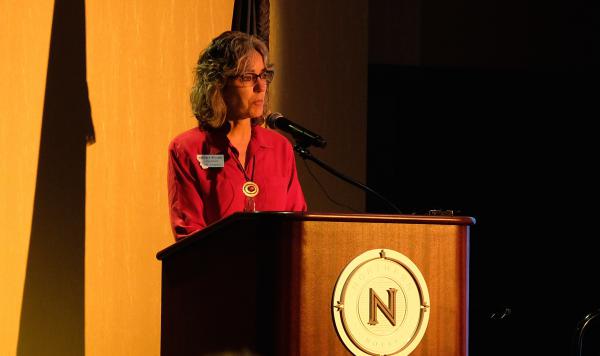 U.S. House candidate Kathleen Williams had been prepared to deliver her regular stump speech in Billings Friday night, but the Democrat discarded it to speak out on the latest school shooting.

Earlier that day, a student opened fire on some of his classmates in Santa Fe, Texas, killing 8 students and 2 teachers. The suspect surrendered to police and was taken into custody.

Williams told about 300 people gathered at the Yellowstone County Democrat’s Truman Day Dinner, “enough is enough” and it's time to talk about gun safety reforms.

“We don't just need thoughts and prayers,” she said. “We need to talk about regulating military-style rifles. They are more lethal.”

Williams, who's a hunter, added it's time to talk about background check loopholes and expanded protections for victims of domestic violence.

“And if the gun lobby wants to give me an 'F' for talking about common sense I will proudly say that stands for fearless,” Williams said.

All 5 of the Democrats seeking the party's primary nomination attended the party’s fundraising event. They were all given a few minutes to rally voters. Absentee voting for the June 5th primary is underway.  The winner of the primary will challenge incumbent Republican Greg Gianforte.

During first period English last Friday at Capital high school in Helena, student Noah Whitehorn, felt his phone buzz with a notification; 10 people were dead following a school shooting in a small town just outside of Houston, Texas.

“I almost cried in the middle of English class. How is this still happening? After all that we’ve done in the past few months you’d think that at least something would have been accomplished.”

What could a potential presidential visit mean for Montana’s Senate race? Senator Daines’ proposal to work through the August congressional recess could affect the campaigns of Senator Jon Tester and Congressman Greg Gianforte. And a new ad says Tester “stepped in it” when he voted against Trump’s tax reform.

Nicky Ouellet (filling in for Sally Mauk), Chuck Johnson and Rob Saldin discuss these stories and more, on this episode of "Campaign Beat."

Five Montana Democrats are running in June 5 primary election for a chance to unseat first-term incumbent Republican U.S. Rep. Greg Gianforte in the Nov. 6 general election. The Montana Free Press surveyed the five candidates to see where they stand on 10 key issues. The candidates were asked to respond in 50 words or less to each question. Below are their responses, edited only for length and style.

Four Montana Republicans are running in the June 5 primary election for a chance to unseat Montana’s Senior U.S. Senator, Democrat Jon Tester, in the Nov. 6 general election. The Montana Free Press surveyed the four candidates to see where they stand on 10 key issues. The candidates were asked to respond in 50 words or less to each question. Below are their responses, edited only for length and style.

The five Democrats competing in their party’s primary for the U.S. House faced tough questions about their electability Thursday night in a debate in Helena.