The Bullock Administration awarded $372,000 to nine community organizations, health care providers, and schools to fund suicide prevention efforts. The money will be used to expand existing programs or to launch new evidence-based efforts.

Bullock said he wants Montana to be a leader in so many areas, but not for suicide. Montana’s suicide rate has been at or near the top in the nation for nearly 4 decades.

“The problem is these are not just statistics and we should never blind ourselves to that. These are real people,” Bullock said. “People of all ages, in all parts of Montana, family members, loved ones, neighbors and students. Suicide has broken the hearts of so many on reservations.”

He said Montana is fortunate to have so many passionate and talented professionals working on this issue.

One of the grants was awarded to Billings Clinic. The Billings-based hospital will spread its $107,000 award from the state among its 11 affiliated Critical Access Hospitals (CAH) across Eastern Montana.

Dr. Eric Arzubi is a child and adolescent psychiatric and heads the Department of Psychiatry at Billings Clinic. He says the funding will standardize suicide screening across its network through the use of an app developed by the University of Vermont.

Billings has tested this electronic screening tool that replicates the judgment of a skilled psychiatrist in screening a patient with suicidal ideation.

“We can’t keep doing what we’ve been doing the last 40 years because we’ll keep getting the same results,” says Dr. Arzubi. “So one of the things we’re trying to do is think outside the box, using evidence based approaches but thinking outside the box and doing things differently.”

Emergency department personnel at Billings Clinic’s 11 CAH’s will screen every adult patient, 18 and older. Those patients who score moderate or high for likelihood of suicide will be referred for appropriate care.

He expects 20,000 people will be screened over the next year.

Money for this effort was included in the Governor’s budget proposal and passed by lawmakers in the form of House Bill 118 during the 2017 Montana legislative session. The bill includes several elements, including $250,000 to address and reduce suicide among Native American youth. All programs eligible for funding must be based on peer-reviewed research or recommended by the Montana Suicide Review Team.

“With this additional support for ongoing efforts and for new, innovative solutions proven to be effective, I’m confident we are moving in the right direction and that we can prevent future tragedies,” said Bullock. 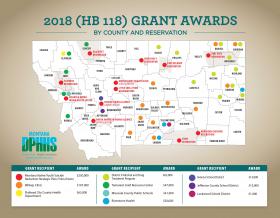 During the last 12 months, almost 10 percent of Montana high school students attempted suicide one or more times. That’s according to a biannual youth risk behavior survey.

State lawmakers this year responded by requiring Montana’s 409 public school districts to draw up suicide prevention and response plans. A committee that met for the first time Wednesday will – as now mandated by law – develop a policy to ensure those districts follow through.

One day after the suicide of a mountaineer in Montana made headlines across the country, Governor Steve Bullock addressed a gathering in Helena, and brought up another suicide that didn't make the news.

"Last Thursday, the Ft. Belknap community buried one of their own," Bullock said. "She had been a scholar at Harlem High, she'd been an athlete and a role model. She was a soldier, National Guard member representing her state and her nation."

As Montana’s Department of Public Health and Human Services faces a proposed $93 million dollars in budget cuts in the wake of  state revenue shortfalls, the department’s new director says she hopes to maintain efforts to combat Montana’s high suicide rate.