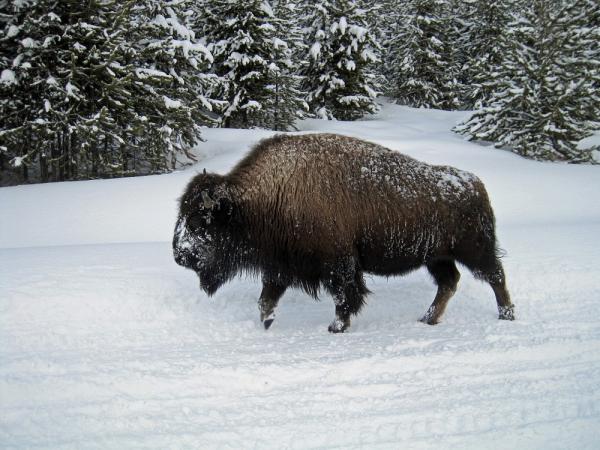 The bull bison are part of a program through the state and the Animal and Plant Health Inspection Service to help clear bison of brucellosis, which can cause infertility and abortions in livestock, and protect existing populations.

The Fort Peck reservation is now keeping five healthy male bison in its quarantine facility, where they’ll monitor the animals over the next year. Eventually, according to Robert Magnan with the Fort Peck Fish and Game Dept., the bison will be used for breeding purposes.

Magnan said Fort Peck currently has a little more than 500 bison altogether, some of which go back into the community. The reservation maintains a conservation and cultural herd of about 300 animals and will harvest the excess once the herd meets carrying capacity.

Bison meat, once a staple of Native American diet, is rich in healthy fats. Magnan said they hope to incorporate the meat into local diets more widely. At the moment, they process the animals in South Dakota due to cheaper cost, but they hope to change that.

“We’re looking at some day building a processing center here on the reservation to where we can process our own meat from the cultural herd to give to our elderly people, our diabetics, and our schools,” said Magnan. “We’re trying to get everyone to eat a healthier diet.”

For the last few years, Fort Peck has been experimenting with selling bison meat and turning it into hot dogs and other popular meats for local schools and programs for elders.

Magnan said once the meat garners enough interest in the general public, they’ll raise the cost to be more competitive.

A Montana tribe has rejected an agreement with the Department of Agriculture that would allow the transfer of a small group of wild bison from Yellowstone National Park to the Fort Peck Indian Reservation.

Montana Fish, Wildlife and Parks has proposed closing a popular, crowded bison hunting area near Yellowstone National Park to non-Indian hunters, and is taking public comment on the idea.

A massive private conservation reserve in northeastern Montana is expanding its hunting opportunities this fall.