Why is Montana known as the 'Big Sky State'?

Welcome to The Big Why, a series driven by your curiosity about Montana. We'll answer your questions, large or small, about anything under the Big Sky.

This is our inaugural episode and we're answering a question that has to do with this show's name: Why is Montana known as the "Big Sky state"?

Katy Wade Hey, Freddy, I'm really excited about this project we're starting and excited to see what we'll discover together. We want to get listeners involved in our work and we'll answer their questions in the future, but for this episode, I've got my own question. Why is Montana known as the Big Sky State?

Freddy Monares Before we sat down for this episode, you mentioned you were going to ask that question, Katie and I wanted to hear if people in downtown Missoula knew the answer. Here's their responses.

"I always thought it was just because, like, when you're driving through like the flatter parts, like eastern Montana, this, like, the horizon is so low, the sky looks so big, that's what I always thought.

"Does it have clearer skies? Sunnier. I don't know, that's a good — I don't know. I never thought about it."

"Honestly, the sky does feel bigger here with all the mountains and stuff in the background."

"Because of the endless wide open spaces, I believe."

"I was told a joke, that you could see your dog run off into the field for like seven days if you let it."

Katy Wade "I have no idea. Are you going to tell me the answer? Yeah, I want to know the answer."

Freddy Monares And we're going to do that now. All of those were great answers. But the story of how Montana became known as the "Big Sky state" starts with an advertising campaign by the Transportation Department in the 1930s.

Jon Axline, a Transportation Department historian, says around that time the state had built thousands of miles of highways and bridges.

Jon Axline And the whole idea was, well, now that we've got these we need to get people to come here. We need to advertise what we've got.

Freddy Monares To do that, the department wanted to figure out a new, catchy nickname that could bring people here. There were a few floating around at the time, like "Treasure State," "Land of Shining Mountains" and "Stub Toe state."

Katy Wade I wish that one stuck.

Freddy Monares For decades, all of those slogans appeared on promotional material for the state. Then in 1947, a guy named A.B. Guthrie Jr. publishes a book. Guess what it's called?

Katy Wade Let me guess. Is it something about The Big Sky?

Freddy Monares Yeah, that's exactly right. It's called The Big Sky. We're going to shift away from the ad campaign for just a minute to talk about this book. I spoke with former University of Montana professor Bill Bevis about Guthrie Jr. and the book. He says Guthrie Jr. owned a cabin on the eastern side of the Rocky Mountains and lived the gruff lifestyle that the book portrays.

Bill Bevis And he had a gravelly voice. 'Well, I didn't want to write a romance novel like those damn things they're putting out now,' you know?

Freddy Monares Yeah, Bevis says Guthrie was the first who set out to write a realistic novel about Montana and Western life.

Bill Bevis Bud was determined not to do a dramatic escape novel of going wild in the wonderful West. He meant it to have an ugly underbelly, and he achieved that.

Katy Wade Wow, I really didn't know any of this.

Freddy Monares So the book was a big deal at the time because Bevis says it was a good attempt to introduce realism into the Montana frontier narrative. He says Guthrie Jr. set out and accomplished writing an epic novel for the time.

Bill Bevis So it's got all these epic qualities of being the right title and the right place at the right time for a state that was ready to really celebrate its frontier history.

Freddy Monares So anyway, the state's trying to get more people here in the '30s. This book comes out in the late '40s. Now let's fast forward to 1961, when the land of shining mountains — not as catchy, right? The state's still looking for a better way to attract more people to come to Montana. So then, decades after they've started this journey of figuring out how to brand Montana, transportation historian Jon Axline says the state picks "The Big Sky," the title of A.B. Guthrie Jr.'s book.

Katy Wade Well, how did that end up happening?

Freddy Monares Yeah, we don't know a whole lot about why the Transportation Department picked it, but that didn't stop Axline from theorizing. He says "the land of shining mountains" makes sense for western Montana. Not so much for two thirds of the state that are Great Plains.

Jon Axline "Big Sky" is really a lot more all-inclusive than "land of shining mountains." I mean, the whole idea is to have people visit the whole state, not just one part of it.

Freddy Monares The Transportation Department produced a video in 1971 called "Montana, Land of the Big Sky." It shows helicopter views of the peaks in Glacier National Park, bubbling hydrothermal features in Yellowstone and water skiers on Flathead Lake.

"The Big Sky country is blessed with an array of recreational areas that just won't quit. But I don't believe you'll find a place with more scenery, excitement and downright western hospitality ...

Katy Wade So isn't that kind of ironic? I mean, that book was all about not romanticizing the state. That gritty underbelly stuff, right?

"Climb aboard and leave the crowds behind. We're going to catch a breeze and float clear over to the far side of a frontier where everything is big and wide and green. Where the nearest living thing is ..."

Freddy Monares So the state's model morphed from something that reflected grit and realism to words on a billboard. But the name stuck. Here's UM Professor Bill Bevis again.

Freddy Monares Bevis says there's a nostalgia of lost paradise in the book, which seems to play out over and over again in Montana history. And even right now, as the state changes and more people visit or move to Montana. The Big Sky name works as a salesman, promising something great or beautiful is about to happen, but you have to get here first.

There you have a Katy. Did I answer your question?

Now we want to know what makes you curious about Montana. Send us your questions and be sure to subscribe wherever you get your podcasts for more answers about the Big Sky state.

Learn more about The Big Why.

Tags
Montana News The Big Why 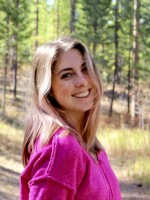 Freddy Monares
Freddy Monares is a reporter and Morning Edition host at Montana Public Radio.
See stories by Freddy Monares
Get MTPR News In Your Inbox
Subscribe now
Listen on NPR One