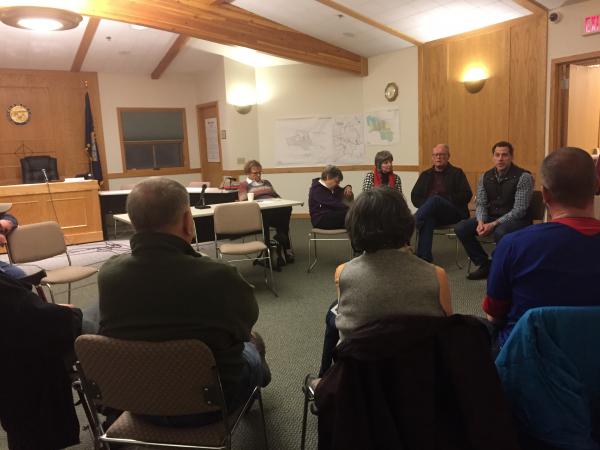 Listen and show up, that’s the pledge from Democratic U.S. House candidate Grant Kier. He said it will be in stark contrast to the current Republican Congressman Greg Gianforte who faces re-election this year.

The former land trust executive director was recently invited to visit with the group Stillwater Rising at City Hall in Columbus.

The group reserved the court room for the gathering.  The first thing members did was to rearrange the rows of chairs into a rough circular shape facing in.

He said people are fed up with the divisive rhetoric and tone that’s dividing Montana and the country. Listening, said Kier, is what made his career work, both as an engineer and as a land trust executive director.

The topics of discussion among the just over a dozen people from Abasaroke, Fishtail and Columbus varied, but a common question was over health care, including Kier’s stand on a single-payer system.

Kier said he didn’t see any hope this Congress will change to that model, basically Medicare for-all. He doubted the President Donald Trump would sign such bill into law if it did pass. That’s why he said he would not make any promises he could not deliver, “I’m not going to walk in a room here and say, 'I’m going to fix health care for our country.'”

“Single payer,” said Lee Johnson of Columbus. “As a candidate from Missoula, (you) come here and get pitched a question about health care. I would love to see that candidate say single payer. Period.”

Johnson said the strength of message can’t be under-estimated. He pointed to the success Republicans have in getting elected in Stillwater County.

“When you sit down in Stillwater County and talk with Republicans, you don’t get multi-syllabic, multi-sentence answers,” said Johnson.  “The strength and clarity of saying, 'Single payer.' Every single country in the world has figured this out but us. What are we doing? Single payer. Period.”

“I respect that. I appreciate that,” said Kier.  “You are not going to hear that message from me.”

“I’m not going to walk into any community in Montana and say I will give you something because it sounds good and I will deliver something because it is simple,” said Kier. He said he won’t promise one thing and do the opposite in D.C., "And if that’s what Montana wants, I don’t want this job.”

“Holy cow, man,” responded Johnson, as the gathering broke into laughter.  “You’re killing me.  You’re so likeable and then...”

“I can tell you I did not get one voter tonight,” said Kier to more laughter. “But I hope I made a friend at least. And I’ll look forward to continuing the conversation.

Kier’s stop in Columbus was just one in a roughly week long swing that included stops in Bozeman for a Democratic candidate forum and meet and greets in Livingston, Billings and Miles City.

Editor's note:  This is part of an occasional series as the 2018 candidates make their schedules known to YPR.

The five Democrats running to be their party’s candidate in the race for Montana’s U.S. House seat had a chance to do something a little different in Missoula last night.

Tonight on "Campaign Beat," Sally Mauk, Chuck Johnson and Rob Saldin talk about guns, and what Montana political candidates are and are not saying about them. That includes Governor Steve Bullock, who’s giving new signals that he might be a candidate for President in the future. Hear analysis of all that and more right here.

This week on "Campaign Beat" we cover candidate hairdos via a new Republican anti-Tester ad; talk about the moderate/progressive split on display at the Missoula Democratic House candidates forum; look at Governor Bullock's ongoing flirtation with running for POTUS; and discus Senate candidates James and Sarah Dean's odd disappearing act.

Two healthcare groups plan to ask Montana voters to continue the state’s Medicaid expansion in November, and to fund it with a higher tax on tobacco .