The beloved Talking Heads frontman debuts his show “American Utopia” at the Hudson Theatre in New York City this month after garnering rave reviews around the world.

They march and float on, off and all around the stage, wearing drums, guitars or keyboards hanging from harnesses around their necks. Byrne even occasionally breaks the fourth wall by addressing the audiences.

He says he envisioned the stage as desert, somewhere the musicians can move about freely.

“I knew almost immediately that my dream was to have all the performers be untethered and be able to move about the stage, kind of what a marching band would do or a second line group in New Orleans or something like that,” he says. “From there, I realized there doesn’t have to be anything on the stage. No instruments, no mic stands, no water bottles — nope, no water bottles.”

“American Utopia” began as an album, then metamorphosed into a Broadway production.

During a world tour, Byrne visited WBUR’s CitySpace in Boston, and told Here & Now’s Robin Young the show is about “coming out of yourself a bit.”

He says this onstage adventure would take both the audience — and Byrne himself — on a journey of self discovery and community-building. 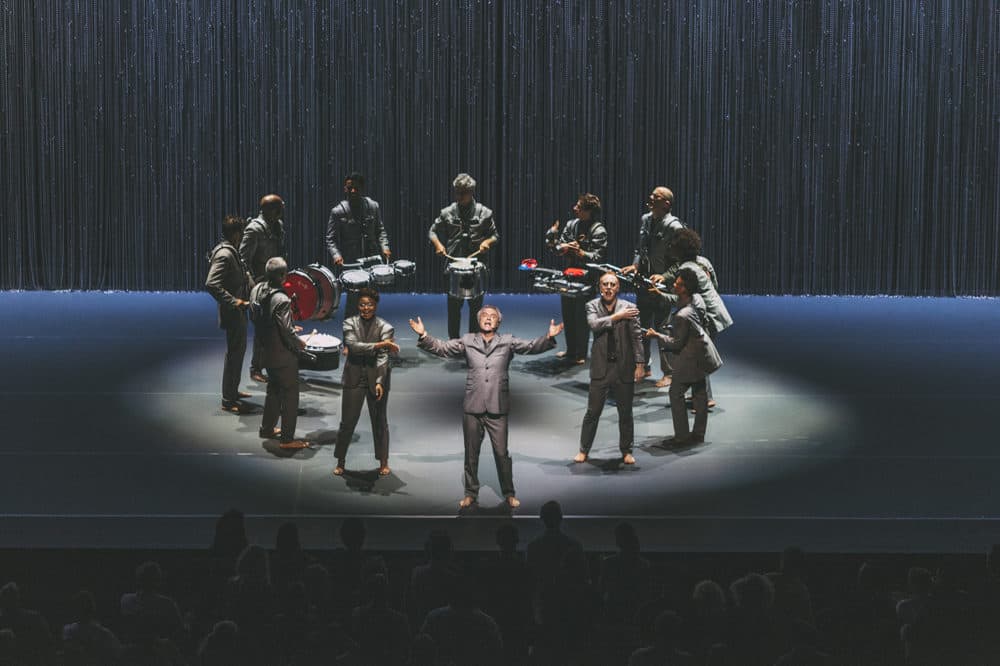 On the narrative of “American Utopia”

“It’s not a narrative like a conventional play, let’s say. It’s an arc, a journey of the person, I guess it would be me. I mean, it starts off with me on stage holding a brain, but it’s a guy living, obviously living, inside his head and he’s holding it in his hand. I feel in the middle. This is a person who is asking all these questions, ‘How do I do this? What am I supposed to do? How is a person supposed to be?’

“That’s something that occurs in a lot of my songs so I thought, ‘That’s handy.’ I mean, I have songs that express that. Gradually it seems like that person finds a community, the band, that allows this person to kind of come out of themselves a bit.

“I think it’s very much about things that have happened to me and changes I’ve gone through but I think it’s a common thing that a lot of people go through.”

On his fascination with houses

“I’m not sure. It’s probably a kind of psychological, symbolic kind of thing, a house is. Maybe the soul or the self or something like that. I think chairs are people. It has a character like a person. It has legs and little arms.”

“Not just [observing everyone else], that includes me. Sometimes I’m observing myself. Well, I’m just asking, ‘Look at what I’m doing. Why am I doing that?’ Or ‘Should I be doing with these other people are doing?’ Maybe it’s coming from another country and being plopped in and you go, ‘Okay, now I got to figure out how am I supposed to behave?’ ”

“After some friends had told me about the spectrum of Asperger’s and autism and I thought, ‘Oh yeah I can see that,’ certainly at an earlier point in my life, not so much now. There’s a part where I felt very uncomfortable socially. So I thought, ‘OK, yes, I can see the wear fit on that. I identify with that.’

“[I am] very functional but socially very uncomfortable. Probably the idea of observing and asking like ‘Am I supposed to do that? Is that what people do?’ that probably goes along with it a little bit [and] maybe a sort of an intense focus on the songwriting or the artwork that I was doing at the time. As other people have said, a little bit isn’t the worst thing in the world. However we are, we don’t know how to be another way, that’s the way we are! You can’t say, ‘Oh, I’m unhappy I wish I was more like this happy gregarious person.’ I just figured I’m not. I’ll make friends with a socially adept person and they’ll be the one that brings everyone in. Sounds very calculated but it wasn’t quite as much.”

On curating his archive of positive news stories, “Reasons To Be Cheerful,” and his vision for “American Utopia”

“That makes it sound like one great grand plan but it does have a certain amount of truth to it. They both attempt to present a world that’s more positive and a world of possibility as opposed to, ‘Oh, we’re really screwed now.’ Which is also true.”

David Byrne’s American Utopia will play on Broadway at Hudson Theatre in New York City from October 4, 2019, to January 19, 2020. Tickets can be purchased here.

Karyn Miller-Medzon produced and edited this interview for broadcast with Todd Mundt. Serena McMahon adapted it for the web.

This article was originally published on WBUR.org.