If Donna Summer was the "Queen of Disco" it could very well be that the "King of Disco" was English musician, composer and arranger Rod Temperton. Starting with the disco group "Heatwave," Temperton went on to work with artists like Quincy Jones, George Benson and Michael Jackson. And yes, he also wrote for Donna Summer.

Join Tom Engelmann as he hangs the disco ball and boogies down to the songs of Rod Temperton on another edition of Unsung Heroes, Influential but Overlooked Masters of Modern Music. 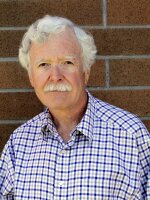