This week on "What I Like About Jazz", we pay tribute to jazz musicians who served in the armed forces. Four branches of the service will be represented.

We'll hear from everyone from Jack Sheldon (Air Force) to Nat and Cannonball Adderley (Army) to John Coltrane (Navy) and Oliver Nelson (Marines). Other Veterans include Wynton Kelly, Junior Mance, Clark Terry, Aaron Bell, Jamil Nasser and many, many more.

British citizen Margaret Turner (Marian McPartland) joined the USO in 1944, and went through basic training before entertaining American and Allied troops, where she also met and married Jimmy McPartland. 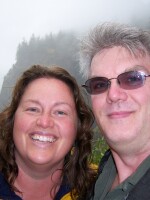 John Arvish
John Arvish is a public school teacher, as well as host and producer of What I Like About Jazz, Muse's Jukebox, and Blues on the Move. He lives with his wife Carrie, their dog Sunny and cat Pokey and a smorgasbord of good music, theater, art and food.
See stories by John Arvish
Related Content