Tai Asks Why: Why Is The Night Sky So Dark – When It Is Full Of Stars?

It’s been asked by Greek Monks in the 6th century, Johannes Kepler in the 17th century and Edgar Allen Poe in the 19th century.

In the year 1823, a doctor named Wilhelm Olbers looked at the night sky and wondered: if we’re surrounded by so many stars, why is the night sky so dark? Now, 300 hundred years later, Tai asks the same question and he’s searching the universe for answers.

Tune in to Children’s Corner, Friday, June 6 at 4 a.m. and Tai will shed light on Olbers’ Paradox, on the CBC podcast Tai Asks Why. 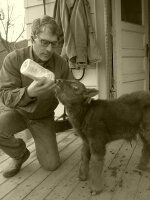 Sam Manno
Sam Manno is a rotating host and producer of the Children's Corner and the Pea Green Boat.
See stories by Sam Manno