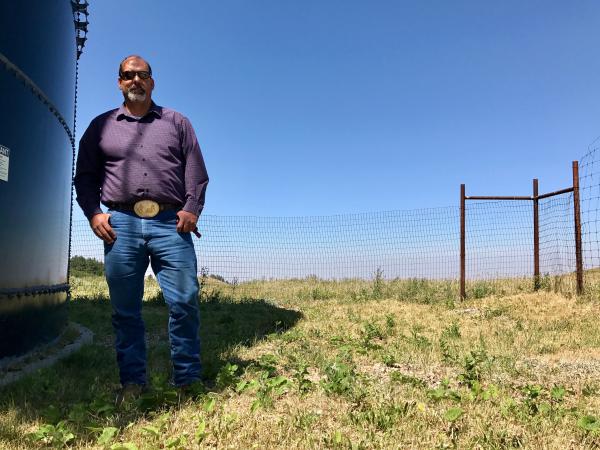 3,000 people might run out of water this summer on the Rocky Boy’s Reservation, but a bipartisan bill moving through U.S. Congress could bring some much-needed relief.

The sun’s beating down on Jarod Parker as he stands in front of a double-wide house on the Rocky Boy’s Reservation. His kids are playing out in the front yard. It’s more of a bone-dry patch of prairie.

“It’d be nice for the kids to play out in the water when it’s hot like this,” Parker says.

But they can’t because no one on the reservation is allowed to run sprinklers, wash their cars, or even fill up kiddie pools.

“I go through the villages every day, telling people to shut their water off,” says Dustin White, the Chippewa-Cree tribal water director.

He says relentless heat, a growing drought and a broken water storage tank have caused to the reservation to nearly run out of water this summer.

It’s so bad that one little problem–such as a pump failure or a house fire–could cause taps to run dry for as many as 3,000 people here.

“If we can get to mid-September, end of September without an issue, we’re going to be lucky. It’s going to be by the grace of God," White says.

While the tribe is drilling two new wells next month, a bipartisan bill moving through congress might bring some much needed long-term relief.

In mid-July, Montana Sens. Jon Tester (D) and Steve Daines (R) reintroduced a bill funding construction of a regional water system. If built, it would pipe in endless amounts of fresh drinking water to the reservation and surrounding communities from a lake in north-central Montana.

"The bottom line is this: water is a basic need for Montana families, for Montana farmers, for Montana ranchers," Daines says. "Unfortunately, our rural communities are often overlooked. Their water projects are behind."

The bill would invest nearly $5 million dollars into the Rocky Boy’s project, but first it needs to get passed.

Rural water systems are often seen as pork-barrel spending by many Republicans in congress concerned about the country’s rising debt. This same bill has already failed three times in the past five years.

But Montana Rep. Greg Gianforte, a Republican who supports the bill, says infrastructure is one thing the federal government should spend money on.

"Particularly when it can’t be provided by the community in some other way. So I am supportive of funding here," Gianforte says. "And this is the lifeblood. We have a situation here at Rocky Boy where they are within a week of completely running out of water. And that would more than dry up the community. It would make it go away.”

The rural water projects bill is currently moving through the U.S. Congress. It was passed out of the Senate appropriations committee last Thursday, and now awaits a vote on the Senate floor.

But back in Rocky Boy’s, the situation is still dire.

Next week, the tribe hosts an annual powwow on the reservation and they're expecting up to 20,000 tourists.

Nate Hegyi: "What are you going to do for water? What’s your plan?"

Dustin White: "Monitor it, and hope we can manage it. We’re almost in a wait and see mode."

If the tribe does run out of water this summer, they’ll declare a state of emergency. White says the national guard is ready to haul in water on tanker trucks, and Wal-Mart has offered to truck in trailers full of bottled water.

Authorities say it is now safe for people living on the Rocky Boy's Reservation to drink their tap water again. The Environmental Protection Agency lifted a boil order today.

Montanans joined in organizing four of the estimated 200 events nationwide yesterday in support of the protests against the Dakota Access Pipeline. Environmental and tribal organizations rallied in Poplar, Lame Deer, Whitefish and Missoula, where our Flathead Valley reporter Nicky Ouellet and Missoula reporter Cole Grant gathered these stories.

HELENA, Mont. (AP) — The way for Montana's American Indian reservations to escape poverty is through the free market, but the shortcomings of tribal governments are preventing businesses from flourishing, Republican candidate for governor Greg Gianforte said in a campaign stop last month.