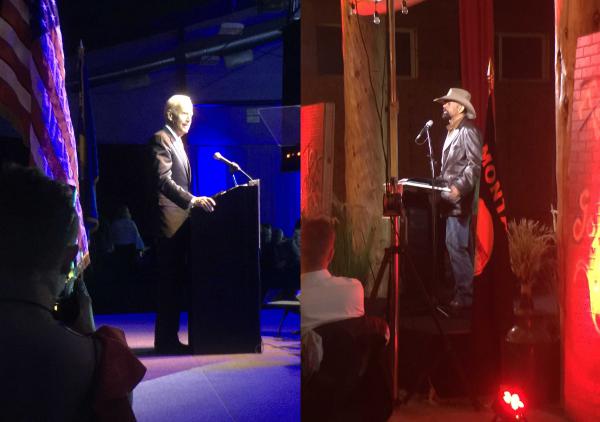 Stay energized. Don’t get complacent. Those messages were delivered at two large political gatherings in Montana.

He said the GOP has to match the enthusiasm and money of Democrats in this year’s mid-term elections, “You already know this, Democrats take back either the House or Senate, the Trump agenda is over. It will be mired in gridlock.”

He said Republican complacency will have consequences.

“There’s the chance that the wall doesn’t get built and that the Obamacare mandate gets restored,” he said. “Oh yeah, and count on President Trump being impeached.”

Ladies and Gentlemen I’m here to implore you we have to regain our sense of urgency about what we’re up against,” Clarke said. “We have to become angry about the thought of losing this unique opportunity to make America great again.”

Clarke is an ardent and vocal supporter of President Donald Trump and his agenda.

He told the crowd, “The deep state is real. The deep state is alive” and it’s out to undermine the Trump agenda. He said this includes the FBI and the Robert Mueller investigation into allegations of Russian meddling in the 2016 Presidential election.

Clarke also criticized Democrats for “identity politics.” He told the group Republicans are being vilified as racists to which he decried, “Bull----.”

The organizers of the Lincoln Reagan Day Dinner and Clarke credited the large turnout on an editorial from Billings Gazette that credited Clarke for past comments allegedly calling for violence against the media and others he doesn’t like. Clarke, in a rebuttal guest editorial, called the op-ed a “political hit piece” and “typical of the liberal media’s hateful campaign against anyone that doesn’t pass their progressive litmus test.”

The headliner for the Montana Democratic Party’s annual dinner in Helena was former Vice President and former U.S. Senator Joe Biden.  Montana Democrats are buoyed in the mid-term elections by the energy and activism from the Women’s March, the Big Sky Rising groups, and the #MeToo movement.

Biden refrained from directly criticizing the president by name, but he said politics today is broken, mean spirited, and crass.

“Think of the nature of the debate today on the national level. Breitbart, some of the things coming out of the Oval Office,” Biden said. “It’s so demeaning. It’s so beneath the dignity of Republicans, as well as Democrats.”

Biden pointed back to the 1960’s and 1970’s. He said while Vietnam and the Civil Rights movement was ripping the country apart, politics wasn’t broken like it is today. He blamed gerrymandering and unlimited money.

In a wide-ranging speech, Biden talked about issues he and other Democrats have championed to bolster the middle class – Medicare, Medicaid, the Affordable Care Act.  He said all are vulnerable now because the GOP need to cut those programs to pay for their tax cut for the rich and corporations. 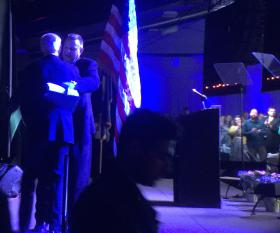 Biden said Tester understands and will fight for the middle class and veterans and their families. He asked the crowd if they understood the damage of the current political state and how it has spread beyond the borders of the United States.

“A number of world leaders have contacted me asking if I can talk to them. Not because I am special but because they think I understand what is going on,” he said. “I can’t do it because I can’t be saying bad things about a president abroad to world leaders.”

“But folks, our power is diminishing because of this naked, phony nationalism and this populism designed to clear space for selfish people to be able to operate,” Biden said.

Biden called Tester “authentic” and got a laugh when he said the farmer from Big Sandy is “a guy who looks like he can lift an ox out of a ditch.”

The Mansfield Metcalf Dinner also featured speeches from Tester, Governor Steve Bullock, and the 4 candidates vying to win the Democrat’s U.S. House primary. The winner will advance to the November general election ballot to face-off against Freshman incumbent Greg Gianforte.

Flathead County Republicans hosted a controversial speaker at a fundraiser in Bigfork this weekend, and barred all but one news outlet from covering the event.

Dinesh D’Souza is a right-wing political commentator, currently on a speaking tour promoting his new book, “The Big Lie: Exposing the Nazi Roots of the American Left.”

For the first time in more than a decade, Green Party candidates will appear on Montana’s ballots for Congress this fall.

Controversial wilderness and banking bills rile Montana's House and Senate elections; support — or lack of — for single payer health care could play a central role in the House Democratic primary; a new online poll shows President Trump remains much more popular in Montana than in the rest of the country; and pleas for campaign donations are ratcheting up as the June primary gets closer. Sally Mauk, Chuck Johnson and Rob Saldin discuss these stories and more, on this episode of "Campaign Beat." Listen in now.