Senior High School to Offer a Varsity Letter In Science

Several school officials say the letter in science is the first of its kind in the state. 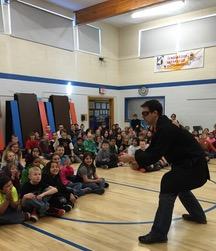 There are several components to earning that letter. “Part of that is tied to their grades, classes that they take, and their community involvement in STEM related things,” says Craig Beals, chemistry teacher and faculty advisor to the Senior High STEM Society.

“We created STEM Society as part of a 5 year plan to increase enrollment in our upper divison science classes,” says Beals.

STEM Society got its start in the 2014-15 school year. Beals worked with the Senior High football coach to develop the criteria to earn the letter in science.

“You don’t have to be an A student.  You just have to be interested,” Beals says.  “You can still be a C student. You just need to do more of the outreach and get yourself more involved to reach that point where you letter and achieve in science.”

One way the STEM Society does that is by mentoring other students. Recently 14 STEM Society members brought the magic of science to students at Newman Elementary school in Billings.

Students in grades 3-through-6 sat cross-legged or on their knees on the gym floor. They squealed and clapped as the high schooler’s lit soap bubbles on fire, made water “disappear” through chemistry, or demonstrated principals of physics. 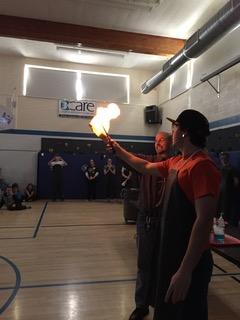 “To date, I have not heard of anything like the STEM Society that they have there,” says Angela McLean, a deputy commissioner in the Office of the Commissioner of Higher education. Among her duties is K-12 partnerships with the Montana University System. The former high school teacher from Anaconda also worked on encouraging more students to take science and math classes in school as Governor Steve Bullock’s former lieutenant governor.

“Far too often we give letters for students who compete and do so successfully in athletics,” says McLean. “I think anytime we can recognize academic achievement and leadership we ought to.”

Tom Cubbage is a biology teacher at CMR High School in Great Falls and the president of the Montana Science Teachers Association. He says many of his peers have STEM programs, but none he says are like Senior High’s STEM Society.

“I mean those young students really look up to those older students,” Juneau says. “Those are their role models. If they can see they are engaged in science and math I think that really just goes a long way.”

The STEM Society is poised to issue its first letter this school year. The members are finalizing what it will look like, but they think it will be shaped like the atom pin their faculty advisory Craig Beals wears on his black lab coat.

200 elementary school children are signed up to learn more about energy and engineering this Saturday in Billings. Industry representatives will be leading hands on activities, and members of Billings Senior High’s STEM Society will also be there.

The images that girls see can affect the career choices they make as young women. That was one of the issues discussed at a conference in Helena Thursday that brought together a diverse group of people who would like to see more young women choose careers in Engineering, or technology.

Leaders from Montana’s business and education communities gathered at a "STEM" conference in Helena today to talk about how to encourage more women and girls to explore careers traditionally dominated by men.

STEM stands for Science, Technology, Engineering, and Mathematics.  Those are four fields that the US is going to have to strengthen if it is to remain competitive in the world economy.   And those are also four fields that have long attracted more men than women.

A University of Montana study found that although many Montana students are proficient in science and math, about 75 percent of them don’t end up pursuing these fields as careers - particularly women. Women make up fewer than a quarter of all STEM professionals in the U.S.—jobs in science, technology, engineering and math. Yet they are half the workforce.