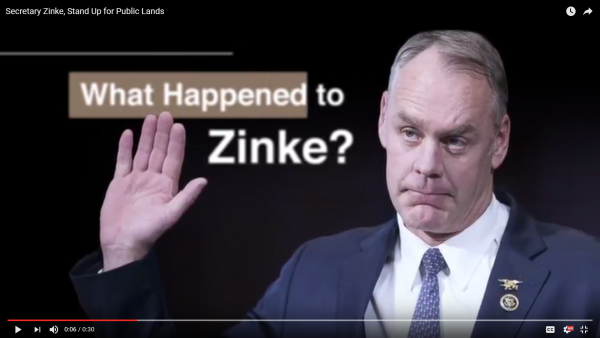 Interior Secretary Ryan Zinke announced on Wednesday he won’t recommend any changes to the Upper Missouri River Breaks. It’s one of 27 national monuments under review by the secretary, who is now the target of a new ad campaign launched by a Montana-based sportsmen’s group.

They’re worried Zinke’s review of other national monuments could put a damper on hunting and fishing in public lands and water.

“Make no mistake, Zinke’s national monument review threatens our heritage and thousands of jobs," Land Tawney, CEO of Backcountry Hunters and Anglers, says in an ad. "Mr. Secretary, don’t turn your back on Roosevelt now.”

The national sportsmen’s group is launching a seven-figure radio, TV and web campaign. Tawney says they want the Interior Department to keep national monuments intact, but the rhetoric that's coming out of Washington D.C. has not been good.

"So we’re trying to give him the space to do the right thing and we’re expecting he do so,” Tawney says.

The campaign comes as a little bit of a surprise because Backcountry Hunters and Anglers supported Zinke’s nomination to become Interior Secretary late last year.

“Do I regret it? No," Tawney says. "I think that Mr. Zinke comes from Montana, he grew up hunting and fishing and I think he cares about public lands. We hope he makes the right decision.”

Later this month, Secretary Zinke will finish deciding whether to shrink, abolish or keep intact 27 national monuments across the country. The Trump administration has been pushing for increased energy development on public lands, including those protected as monuments. According to a progressive organization, Secretary Zinke has filled his cabinet with at least 21 employees from resource-extractive backgrounds.

Tawney says hunting and fishing can happen alongside responsible energy development, as long as it's cleaned up.

President Trump ordered the review of some national monuments in April. While the Upper Missouri River Breaks in Montana was spared, Zinke suggested shrinking the controversial Bear’s Ears National Monument in Utah. It was designated by former president Barack Obama late last year.

Attempts to reach Secretary Zinke for comment by deadline were unsuccessful.

Interior Secretary Ryan Zinke wants to streamline the process for oil and gas development on federal lands. Zinke signed an order Thursday mandating Bureau of Land Management oil and gas lease sales be held in each state on at least a quarterly basis.

Zinke noted during a telephone press conference that under the Obama administration BLM fell far short of that legally-mandated limit.

Sec Zinke 'Likely' To Leave Missouri Breaks Monument As Is

Secretary of the Interior Ryan Zinke visited his hometown in Whitefish today to address the Western Governors Association.

Secretary Zinke is currently running a review of more than two dozen of the country’s largest National Monuments, including Montana’s Upper Missouri River Breaks, to determine whether the Monument designations should be revoked or reduced in size.

Environmental organizations reacted Wednesday to reports that Montana Congressman Ryan Zinke is President-elect Donald Trump’s nominee for secretary of the Interior. The Interior Department and other U.S. agencies control almost a third of Montana’s land and even more of the vast amounts of coal, oil and natural gas that lay beneath it.

Zinke has been critical of federal land management and has advocated for more development of coal, oil and natural gas. However he's also an outspoken supporter of keeping public lands in federal hands.

The group that proposed the quiet waters initiative says they plan to try again.

The group Backcountry Hunters and Anglers proposed the rule in May 2016 to reduce conflicts between motorized and non-motorized users. But on Friday The Montana Fish and Wildlife commission voted down their proposal that would have restricted the use of motorized boats on some Montana waterways.

The U.S. House took a vote related to public lands yesterday that has Democrats and conservation groups crying foul.

It’s part of a larger rules package that would change how Congress calculates the value of federal public lands when it comes to transferring them to states.