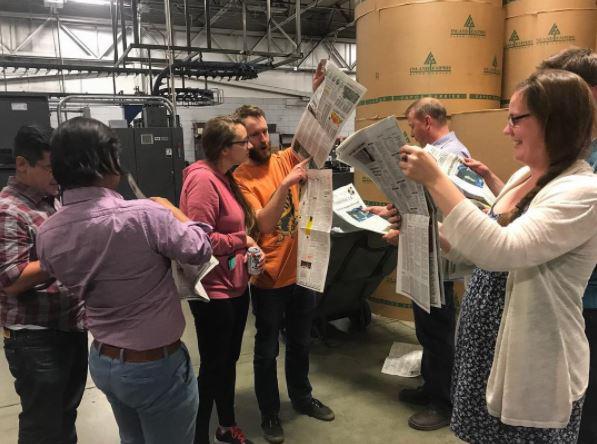 GOP Candidate Greg Gianforte faces misdemeanor assault charges for "body slamming" a reporter for The Guardian at his campaign headquarters last night, on the eve of today’s special election to fill Montana’s lone U.S. House Seat. He must appear in Gallatin County Justice Court by June 7.

Crime reporter Whitney Bermes for the Bozeman Daily Chronicle first heard the assault report on a police scanner, as she was packing up to leave the newsroom and go home for the evening.

YPR’s Brie Ripley is joined in conversation with Bermes who’s been following the assault from police report to Gallatin County Sheriff’s Office citation.

* This story has been updated since original publication from "Greg Gianforte assaulted a reporter" to "GOP Candidate Greg Gianforte faces misdemeanor assault charges for 'body slamming' a reporter for The Guardian at his campaign headquarters last night, on the eve of today’s special election to fill Montana’s lone U.S. House Seat. He must appear in Gallatin County Justice Court by June 7." 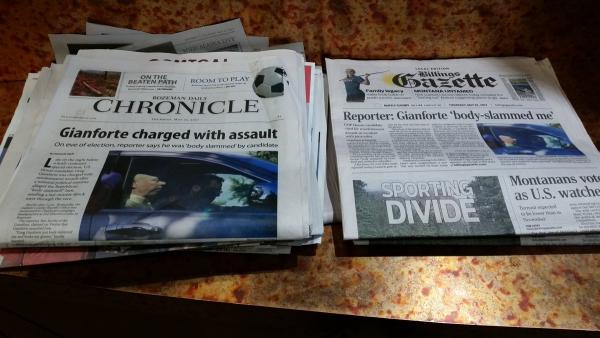 Brie Ripley: Whitney Bermes is the cops and courts reporter at the Bozeman Daily Chronicle and she’s been covering GOP U.S. House candidate Greg Gianforte’s assault on a Guardian journalist. Thanks for joining YPR, Whitney.

Whitney Bermes: Thank you for having me!

BR: So yesterday, a little after 5 p.m., you were about to head home from the office. You heard on the police scanner that GOP candidate Gianforte had body slammed a reporter at his campaign headquarters. What happened next?

Jacobs reported this to #Bozeman police. Just heard it come over the scanner. https://t.co/7vLsf3YvXU— Whitney Bermes (@wabermes) May 24, 2017

WB: Me and my colleague, Freddy Monares, kind of looked at each other and knew something was up so we listened a little more and waited for the dispatcher to repeat what was reported and that's when we got the full story of what was being reported to police: that a Guardian reporter Ben Jacobs had alleged that Mr. Gianforte had body-slammed him while he was trying to ask him questions at Gianforte campaign headquarters.

AUDIO OF ASSAULT PROVIDED BY THE GUARDIAN

BR: When did it go from alleged assault to Mr. Gianforte receiving a citation for a misdemeanor by the Gallatin County Sheriff’s office?

WB: About 10:30 p.m. was the Sheriff’s Office announce that Mr. Gianforte had been cited for misdemeanor assault.

Brian Gootkin starts by asking everyone to stop calling dispatch center. "They have important public safety business to take care of." #mtal— Whitney Bermes (@wabermes) May 25, 2017

Gootkin does not identify other four witnesses. #mtal— Whitney Bermes (@wabermes) May 25, 2017

Gootkin: Charges not filed at the scene "because we didn't have all the information at the time." #mtal— Whitney Bermes (@wabermes) May 25, 2017

BR: What's the difference between misdemeanor and felony assault in Montana?

Basically I think it's up to the officers who are investigating. Basically it just has to be a more serious body injury as opposed to just a minor injury.

BR: If Mr. Gianforte is charged with Misdemeanor assault, what's the maximum penalty that he might face?

WB: The maximum penalty that he would face if he is convicted whether that's by pleading guilty or if he decides to take it to trial and he is found guilty, the maximum penalty would be up to 6 months in a county jail and a 500 dollar fine. Or both. The next step Mr. Gianforte will have to appear in Gallatin County Justice Court on the charge between now and June 7. Justice Court has an open court three days a week in the morning on Monday, Wednesday and Friday, where people who are cited for misdemeanors can appear on the charges. So he has a little levity with when he will appear in court. It just has to be on or before June 7th.

more info: Justice Court has open court dates on Mondays, Wednesdays, Fridays @ 8 am. Can come to any of those between now & June 7. #mtal https://t.co/kaOa9EsYfM— Whitney Bermes (@wabermes) May 25, 2017

On Eve Of Election, Montana GOP Candidate Charged With Assault On Reporter

The Montana special congressional race was roiled on the eve of Thursday's vote after GOP nominee Greg Gianforte allegedly "body slammed" a reporter and was subsequently cited by local authorities.

The Gallatin County Sheriff's Office announced it was charging Gianforte with misdemeanor assault after "multiple interviews and an investigation." The candidate was given a citation, the office said, and would appear in county court sometime before June 7.

HELENA, Mont. (AP) — A reporter said the Republican candidate for Montana's sole congressional seat "body-slammed" him Wednesday, the day before the special election.

House Race 'Closer Than We Would Like,' Gianforte Tells Supporters

Listen
Listening...
/
1:44
House Race 'Closer Than We Would Like,' Gianforte Tells Supporters

This week Republican U.S. House candidate Greg Gianforte has been telling his supporters that the race is, “closer than it should be.” MTPR's Corin Cates-Carney dropped in on a Gianforte get-out-the-vote event at Montana GOP headquarters in Helena today.