In July 2019, Annie Garde ushered a flock of writers, ages 8-14, in KUFM's Studio B to read poems they'd written with the Missoula Writing Collaborative's "Words With Wings" summer camp. To prime the pump, teachers Dana Fitz Gale, Sheryl Noethe and Anna Zumbahlen dangled before their students art, verbal prompts and the occasional imaginary takeover of a university building.  Listen to "I'm From the Hayfields," "Ode to a Goat," "Non-Existant Pie," "You Are, You Are Not," "The Purple Bug," "The Best Night For Peach," "Ode to Chili" -- and 36 more.

I am a lioness as she stalks her prey.
I am the midnight sky, silver stars upon it.
I am the little songbird, singing non-stop till evening.
I am the cheetah, racing across the savannah.
I am the solitary pine tree, standing when everybody else is cut down.
I am the acid rain, burning people and everything else.
I am the gap of pure blue in the cloud-filled sky.
I am a soft song of solitude, notes twining with air as I drift over open seas and finally reach the ears of a girl,
the one friend I will ever have.

“The sky is the most enchanting, especially when it is grey,”
Said the pluviophile, some time ago.
Then the heliophile said, “Look
to the sun; it is a grand light.”
Then the cinephile said, “Mooooovies.”
But the Anglophile insisted on an hour of tea.
The Listzophile interrupted, with her love for fast piano.
The linguaphile wouldn’t stop talking
about the uses of some new word, with origins from the Middle East.
But the astrophile wished to talk about the latest on celestial bodies,
And no one was at peace. 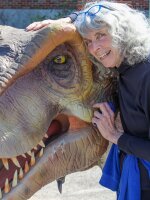