In celebration of International Women's Day and Women's History Month 2015, Beth Judy and Ann Szalda-Petree produced what Ann calls an hour-long "docu-drama." It's about about access to justice,  health care, education and political power, but also about why we often don't hear about the lives of women, whether they live in far-flung parts of the world or in our own backyard.

"Our reporters will look across women’s lives — from birth to childhood to adulthood, and from middle age to old age — exploring how gender roles play out from our first days to our last across health care, education, employment, politics and social life. And we’ll invite you to share this journey and your own experiences.

We’ll examine the role both men and women play in maintaining traditions that limit the status of women. We’ll ask you and others across the globe to compare notes, discuss, argue and share your stories. We’ll offer women the chance to see what life looks like across cultures by connecting them with women of the same age and social situation in other countries."

You can hear the work of "Across Women's Lives" on PRI's weekday program, "The World."

Anne Bailey is a digital producer and visual journalist for "Across Women's Lives." Anne tells stories using video, images, graphics and data, in addition to audio. Currently, she teaches multi-media documentary storytelling at the Salt Institute For Documentary Studies in Maine. Recently, Anne founded new multimedia journalism programs in Congo and Tunisia. Before that, she spent four years teaching and writing in Missoula.

Sonia Narang is a multimedia journalist who covers global health, education, culture, and politics. She primarily focuses her reporting on the lives of women and girls, and the challenges they face around the world. Her journalism work has taken her across India, Pakistan, Nepal, Japan, and the US. Narang’s multimedia stories have aired on the BBC, PRI's The World, The New York Times, GlobalPost, PBS NewsHour, Frontline/World, and Time.com.

Kathy talks with Ann about the Canadian indigenous and environmental justice issues that first mobilized her activism. She also profiles the role of Indian People's Action in interrupting the megaload-sized vehicles hauling tar sands processing equipment through Montana to the Canadian tar sands. Kathy tells Ann about the importance of the Flathead Water Compact, the potential impacts of the Keystone XL Pipeline, and the ongoing environmental destruction among native communities in the region of the tar sands.

On the Canadian tar sands development, Kathy says: "When I saw and started to understand these things happening with the bitumen oil and the pipelines in Alberta...I was shocked. When you're creating that bitumen, you need a lot of water. I encourage people to get online and research the tar sands, which I did. I was like, "where's the justice here?" The air is being affected. We're talking about the devastation of our lands and water by this extraction because they use many chemicals that are cancer-causing. They are pumping this into our earth, but it's not even acknowledged that those chemicals are in the air, too. It's really hard to avoid...If you go there and see for yourself, there's nothing living there.

"In regards to First Nations people, the boreal forest has been there for them for generations, from the beginning of time, and these lands are sacred. The tar sands that are being extracted, the reservations, the First Nations people, are all around there. Right now, these people are being affected immensely by cancer - all kinds of cancer, young and old. This is devastating and it's something they can't escape. That's their home; where are they going to go? Those who come to work in those places, they come to work and they can leave. Those First Nation people, that's where their roots are, that's their ancestral territory. As well as the devastation of the plant life and the air quality and the birds and the fish and our freshwater source - it's a big deal." 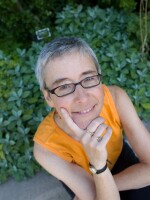 Beth Judy
Beth Judy is host and producer of The Plant Detective, a locally produced and nationally syndicated program, which airs on Montana Public Radio on Monday afternoons and Saturday evenings between NPR and "A Prairie Home Companion." Judy is also a producer of In Other Words, a late-night hour of programming from women's perspectives.
See stories by Beth Judy